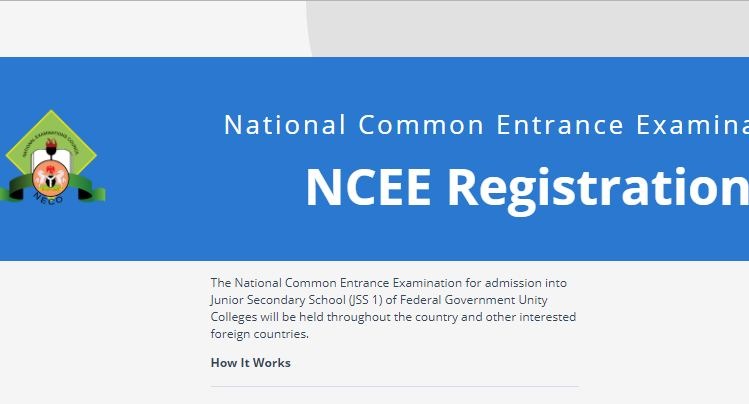 How To Register for National Common Entrance 2020:

Registration is done strictly online. How much is common entrance form? read below.

a. Candidates within Nigeria;

b. Overseas Candidates (Europe and other overseas Countries);

High Commissions, Embassies or Consulates should collect scratch cards from the nearest NECO State Office after the payment of $400.00 into NECO Treasury Single Account (TSA) in any of the Commercial Banks. Overseas Candidates should Note that Examination Centres are only within the Country.

NOTE: Change of Name, Date of Birth and State of Origin will not be entertained after the conduct of the examination.

Please, ensure you use a valid and active email address while registering because you will need to verify the email. You will not be able to proceed with an inactive email.

d. Candidates are to choose any two of the Federal Government Unity Colleges i.e First (1st) and Second (2nd) Choice.

Blind Candidates: Blind candidates are to register like everyone. However, they are to notify the NECO State Officer of the State where they intend to write the examination not later than 3 weeks to the commencement of the examination.

Which day is the common entrance exam? The NECO National Common Entrance exam will now hold on Saturday 17th October, 2020.
This was made known by the Minister of State for Education, Chukwuemeka Nwajuiba, during the announcement for reopening of schools for exit students after the Corona Virus (COVID-19) lock down.

Meanwhile registration for the examination continues.

The examination will consist of the following:
PAPER I
Part A – Mathematics and Basic Science
Part B – English and Social Studies.

The registration website is still open till further notice.

Full List of All Federal Unity Colleges in Nigeria:

Here is a full list of the 104 Federal Unity Colleges in Nigeria and their website / location address.

UMYU 2018/19 Registration Guidelines for New Students is Out