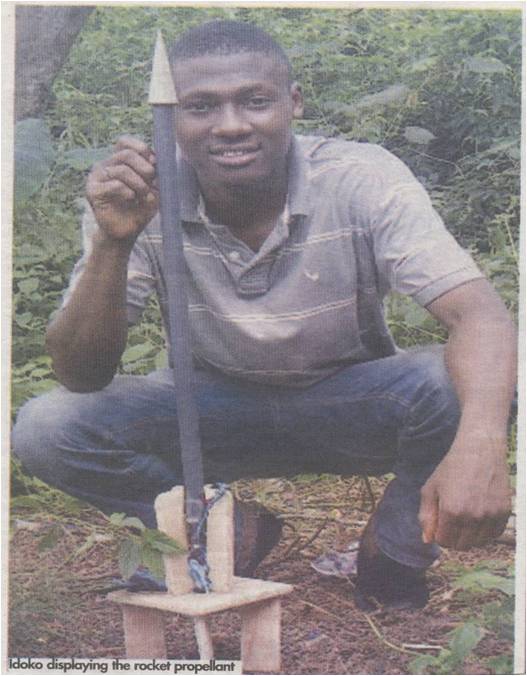 Are you one of those worried that our universities do not produce researchers and innovators anymore? Maybe you have lost hope that nothing good will ever come out of our ivory towers again, and because of that, are making plans to send your children abroad for higher education. There is hope. The indomitable spirit and ingenuity of Nigerians that were on display during Nigerian Civil War when Biafrans produced “shore batteries” rockets, “ogbunigwe” (the dread mass killer) and other war arsenals are still present with us. This was in evidence, recently, during projects defense organized by the Department of Physics and Astronomy, University of Nigeria Nsukka.

A 20-year-old of the department called Idoko Modestus Chijioke stunned the panel of assessors when he presented an amateur solid rocket propellant as his own project. His lecturers not only marveled at his ingenuity, his supervisor, Dr. J. A. Alhassan, was so proud of him that he called on the federal government to aid the young genius to make the best to conquer his world. The amateur rocket has PVC-pipe as the motor casing, aluminum as the nose cone, 1/2-inch pvc-cover, aluminum and a 1/2-inch diameter pipe as the nozzle.

The propellant is made up of 325 grams of potassium nitrate (oxidizer) and 175 grams of sorbitol (sugar), making a total of 500 grams. The PVC-pipe is of 3/4-inch diameter, and 65 cm in length. The rocket motor igniter is a mixture of potassium nitrate and charcoal at 80/20 ratio, to form it into a black powder (gun powder) Amateur rocketry is also known as experimental rocketry. The project design objective according to Chijioke was to test the workability of a potassium nitrate (oxidizer) and sorbitol (fuel) blended into a KN-SB propellant for the amateur rocket made with local materials. The rocket which was launched successfully on one of the hill-tops behind the university attained an estimated height of 35m in flight.

In a chance encounter with this reporter, Chijioke shed more light on how he came up with the idea for the project. “ I came up with this project because of a childhood dream of being a rocket scientist,” he said, “and this particularly led me into the Department of Physics and Astronomy, of UNN, to get a good grasp of the physics/science of rockets and an understanding of astronomy for which rocket is basically built.” Asked what challenges he met in the course of carrying out the project, the soft-spoken young man said he cannot point to any because according to him, “life is all about challenges but with focus and determination, success will surely come.”

“Some people around me thought this was not possible,” he added. “But this only made me determined to prove them wrong. The other challenges were normal in amateur rocketry as several trials were made and several failures recorded. But at last the design objective was obtained. I have dreams and tall ambitions. One of them is to be in space one day.

I only pray that my dreams will get support both from government and well meaning individuals so that they will be actualized.” In a chat with Education Review, Alhassan, his project supervisor, said that, through his project, young Chijioke has demystified science. “The solid rocket propellant constructed by Idoko Chijioke, though an adaptation of an amateur astronomer experiments, is original. He fabricated the rocket from locally available materials from our environment.

Whenever we hear of rockets, our minds by reflex action go to the technologically advanced world. Chijioke has demystified science by his effort. If he is properly motivated and equipped, he can break the ice in scientific world. There is hope for Nigeria ’s national transformation if we can support and fund scientific innovations like my student has done” he said.